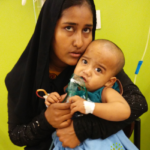 The first thing three-year-old Mohammed Hasan did after his breakfast, was run into the yard, grab the bottle of the energy drink he spotted there, and glug it down before anybody could stop him. The downside? The red liquid in the plastic bottle was not the energy drink, but petrol stowed away for his father’s boat.
His father Shah Alam was heading out when Hasan’s mother yelled that the boy was throwing up blood. He hopped onto his neighbour’s bike with his son and rushed him to ChildLife’s ER at Civil Hospital.
At ChildLife, the staff recognized his condition as critical. His clothes, which reeked of petrol, were removed and he was bathed. He was diagnosed with poisoning and cannulated. He was given injections to stop the internal bleeding, a syrup to soothe his tummy.
Further investigations were ordered.Hasan was kept under observation for 6 hours and shifted to the ward when his condition stabilized. After 4 days at the hospital, Hasan went home completely cured.